Recently, an article posted on Facebook declared any Christian who voted for Trump was “making a mockery of Jesus Christ.” The article beats the same worn drum. Trump disrespects women.  A womanizer should not be in the White House.  Really?  Bill Clinton turned the Oval Office into a whorehouse!  Hillary re-victimized the women by attacking them. Clinton’s accusers came forward on their own while attorney Lisa Bloom sought to pay women $700,000 to accuse Trump. Neither Republicans nor Democrats get a trophy for their treatment of women.

The nerve center of the article isn’t political. It is spiritual. It takes unmitigated gall of catastrophic proportions to measure a person’s faith by the ballot box. Moses was a murderer used by God. David was an adulterer and orchestrated a murder yet God called him a man after God’s heart. Rahab was a prostitute but was in the direct lineage of Christ. God’s power and grace are on full display when he uses unfit, unwanted and imperfect people to do great things.

The “good” people in the Bible were the Pharisees and Sadducees, those termed Teachers of the Law.  They were in charge in Jesus’ day.  They set themselves as the moral compass and the beacon of all that was right.  Jesus, however, referred to them as hypocrites, a brood of vipers, snakes, phonies, and oppressive.  Jesus set Himself up against the holier-than-thou even as He reclined with sinners. 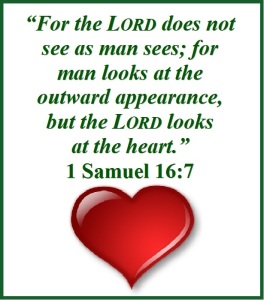 The mockery of Jesus comes when we promote our vote as the only Christian one.  Or when we use faith as a weapon of mass destruction.  It’s a pitfall Jesus warned us about and fought against.  He left no question as to our inability to judge one another. 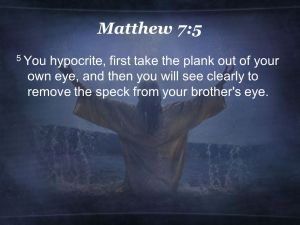 A person who uses a vote as a measuring stick of faith only invites questions about himself.  One of the foundational beliefs of Christianity is that God works good through bad situations.  Shaming someone for their vote defies that core belief.  Our shoulders are not the ones of which the weight of the government rests.  That is Jesus’ job.  God makes our job equally clear. 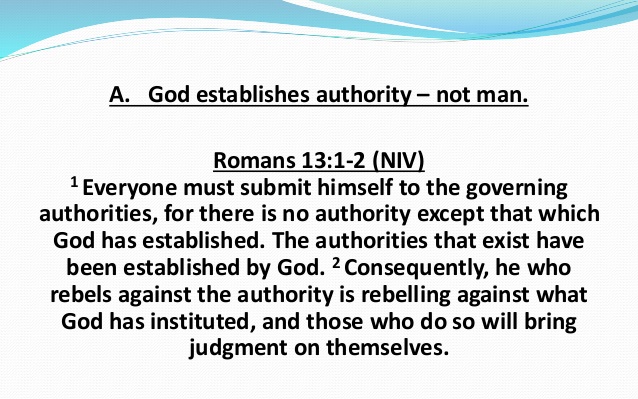 That verse prohibits the Christian from saying, “not my president.”  It makes no difference whether or not you like the president.  God expects His people to act according to His Word and do right even if the government is wrong.  It is the responsibility of every minister in America to bring that point home to their congregations.

When you see people on social media promoting such outrageous claims of mockery ask yourself why.  Humans have personal agendas but God has an agenda for humanity.  More often than not, God will enter from an unexpected avenue through the least capable person.  So, is a vote for Trump a mockery of Jesus?  No!  It is a surrender that we’ve done all we can and depend on a loving and just God to do what we can’t.  It speaks to a deep knowing that regardless of what the world says, it’s the sinner who has a true heart for God.

This was my second visit to BJ’s. I found the staff to be as pleasant and knowledgeable as I remembered. I wanted to order the parmesan-crusted chicken again but forced myself to step out of my realm.

Wednesdays are burger days at BJ’s. You get the burger of your choice for $10 and unlimited fries. You can also get any BJ Brew for $4. I decided to take advantage of both offers. Not having tried any of their beers I asked the waitress her opinion. She suggested the amber brew. She proclaimed it the best beer on the planet. While I can’t speak for all the beers on the planet, I can say it was smooth, fantastic and the best amber draft I’ve ever had.

Feeling adventurous, I ordered the new appetizer of honey sriracha brussels sprouts for $5.95. I confess to liking brussels sprouts but this dish may win over those who don’t really care for them. They are tossed in “Big Poppa Smokers’ Desert Gold seasoning,” fried and then drizzled with “sweet sriracha Crema.” They were very good. I preferred more crema, but that is a personal choice, not a chef oversight.

I ordered the Portobello Swiss Burger. On every day except Wednesday, it sells for $12.95. Containing basil pesto, arugula, tomato, caramelized onions, roasted garlic aioli, balsamic vinaigrette, swiss cheese and topped with a portobello mushroom, the burger is massive. I had to cut it into manageable pieces and could only eat half of it.

I confess I was a little worried about basil pesto and balsamic vinaigrette on my burger. It seemed an odd pairing. Turns out my concerns were unwarranted. The only thing bigger than the burger’s size is its flavor. There is not an overwhelming flavor of one ingredient. Instead, it is an orchestra of flavors working together to provide a delectable treat to the taste buds. I brought home the half I couldn’t eat at the restaurant, reheated it the next day and the flavor still popped. 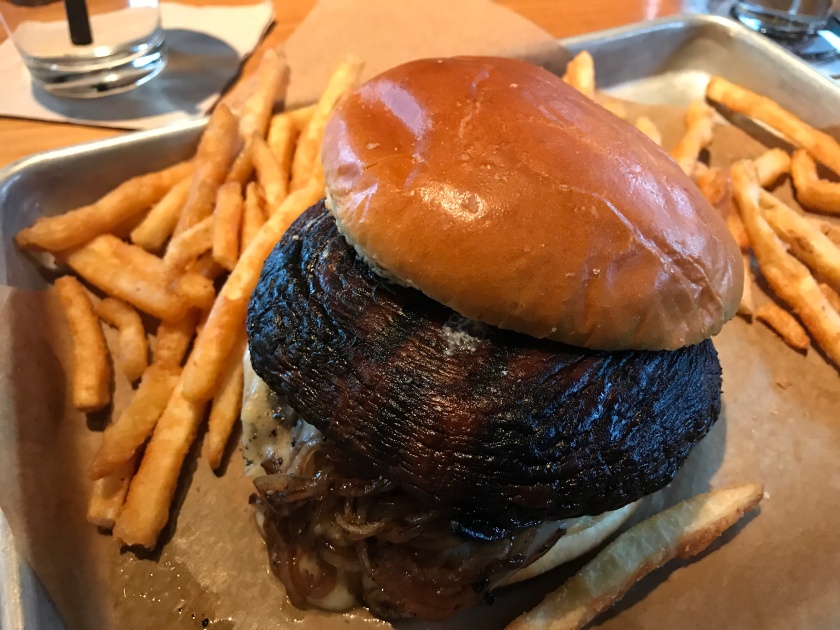 If you haven’t tried BJ’s I highly recommend it. Their large diverse menu means there is something for everyone.  The staff is friendly and attentive. The food came hot with minimal wait. BJ’s is located at 3297 Nicholasville Road, (in front of Fayette Mall) Lexington, KY 40503. To order online for the Lexington location Click here. All other locations click here.