When you’re a freelance writer or indie author you’re a business. You’re out hustling every day. Social media makes it simultaneously better and worse. Access to agents, publishers, and other writers is fantastic. But now before publishing a book or getting an agent you must create your brand and build your author platform. (insert eye roll)

I don’t want to do any of that. I want to play with the people in my head. The ones I created out of thin air but feel so real. The world they live in is more fun than mine. None-the-less, a girl’s gotta do what a girl’s gotta do. And this girl created a YouTube channel to help with that platform everyone in the industry harps on.

Coronavirus drives people to the internet. When our entertainment options are eradicated we go online. I knew I had to make a video. It took me all day to work up my nerve. But alas, I finally did. Reward my strength in facing my horrid fear by watching my videos, subscribing and ringing the bell to get notifications. This is the ultimate social distancing. Until next time, take care of yourself, be kind to others and wash those hands! Click here for video

The all-knowing Harry got himself punked. Too obtuse to see the plethora of red flags, he turned into a Chatty Cathy. He revealed himself as a disturbed, arrogant child. His rudimentary knowledge of coal set me off.

I live in Kentucky. Unlike egotistical nonsensical Harry, I know about coal. Coal is to Eastern Kentucky what actors are to Hollywood. We have the most mines in the country. Closing coal mines means literally wiping out entire communities. Those who don’t starve to death or commit suicide will turn to government assistance. Not only are we the fifth largest coal producer, but we are also the fifth poorest state.

Thanks to politicians robbing Peter to pay Paul, Kentucky is in financial crisis. Much needed support and programs are being cut. My son DJ is special needs. Kentucky doesn’t have the funds to help parents of special needs kids remain in the workforce like other states. Therefore, I left my lucrative job to care for DJ. The lost income forced my husband to work three jobs. Our four other sons were under age 11.

DJ spent more time in the hospital than out and I got cancer. The loss of my job meant losing excellent healthcare coverage that would have paid 100% of all medical bills DJ and I needed. I felt certain if the cancer didn’t kill me, the stress would. It took almost 20 years to crawl out of those black days.

Harry wants to take my personal tragedy, amplify it by ten and inflict it on over 700,000 Kentuckians all in the name of climate change. While Kentuckians lose everything, Harry will be private jetting around the globe on Daddy’s dime and British taxpayer money giving million-dollar speeches to fracking supporting companies.

Pikeville proves Kentucky can escape the coal mines. Once known as a coal town, Pikeville now thrives in the medical field. How? A wealthy man put his money where his mouth is and rallied support from others. He turned around a struggling hospital and built a medical college. Knowing the key to success is investing in people, hospital employees enjoy free healthcare and great pay. That is the epitome of being committed to your cause.

You going to do that Hollywood Harry? Are you so committed to an anti-coal world you’ll sacrifice your mansion, private jets, overpriced clothes, celebrity hob-knobbing, and million-dollar speeches? I didn’t think so.

So, in the words of your little BFF Greta Thunberg, “How dare you!” How dare you think you know all the answers. How dare you contribute nothing but take everything. How dare you devalue people. How dare you present as climate control pious while raking from fracking supporting companies. Most of all, how dare you attack my state, my people, when you have never stepped one designer shoe here.

You sit on your holier than thou throne in your privileged life, calling for the destruction of thousands of lives. That Nazi costume you wore wasn’t a costume at all. It was an expression of a warped sense of self. You have the audacity to attack our president for preserving lives, yet you’re too spineless to walk the coal mines as you did the landmines. The only one with bloody hands is you, Pontius Pilate.

At a family reunion out of state, DJ’s service dog alerted to an ear infection. Since DJ gets ear infections like a frat boy in a dare, Duke got a lot of practice honing his skill. Duke is gone over the rainbow bridge now but his perfect legacy of diagnosing ear infections lives on.  However, Duke was a bit quirky. He tossed condescending looks better than any human.  He was all business in his service dog role but every once in awhile he did something nutty. 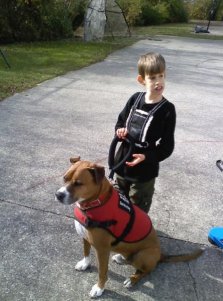 My husband Steve has a freakish ability to find his way around any town. Even using old school paper maps he rarely got lost. But when he is lost – he is REALLY lost. And he does not cope with it well.  Suddenly, the boys and I are not funny.  We dispute this.  Some of our best zingers are triggered by Steve’s directionally challenged…