Despite homeschooling DJ we always have a Valentine’s Day party.  We’ve been talking about the party this year for a week.  Last night before he went to bed I told him all about the things we’d do today, much to his excitement.  We were going to go shopping, make cupcakes, crafts and just all around merriment.

Look at our cupcakes!  Aside from DJ being a little heavy handed with the sprinkles, they are perfect.  And our giant chocolate kisses turned out perfect, despite it being our first time attempt. 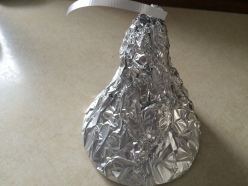 Anyone looking at these pictures would think we had a great time.  You know what?  They would be WRONG!  Somewhere between last night’s excitement and this morning’s reality DJ lost his “give a care” chip.  He was not only uninterested in any sort of Valentine’s Day activity but he made sure I suffered while making him do them.  Meanwhile, I’m living in some idiotic state thinking he’s going to warm up to the idea.  I was sure that at any given moment the merriment I had dreamt of would commence.  Wrong again!

Lost somewhere between the crazy notions of, “oh, he’ll come around” and “by george it’s a party and we’re going to have fun if it kills us both”, I came to my senses.  It’s not like guests were arriving at any moment.  The only guest was the dog and she can’t have chocolate or cupcakes.  There’s a reason he has special needs. Uh… because his needs are special (perhaps not as special as his mother’s though).  And it’s homeschool for crying out loud.  I’m not even competing with other mothers.  Apparently, I’m just crazy.

Alas, I gave up the party mentality and let the child go watch Big Hero 6.  And for that, I got the sweetest gift of all; a hug and big kiss from my very special Valentine. 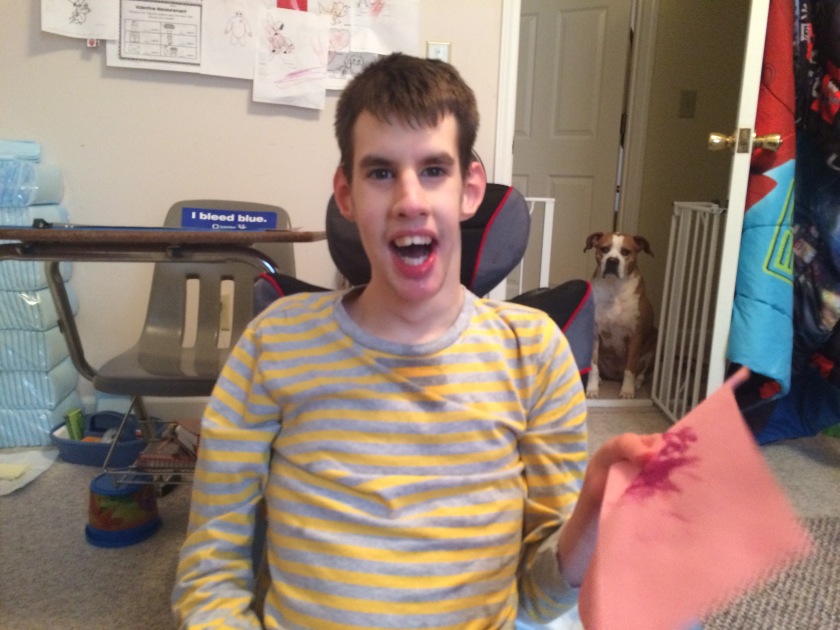 I am very proud of this 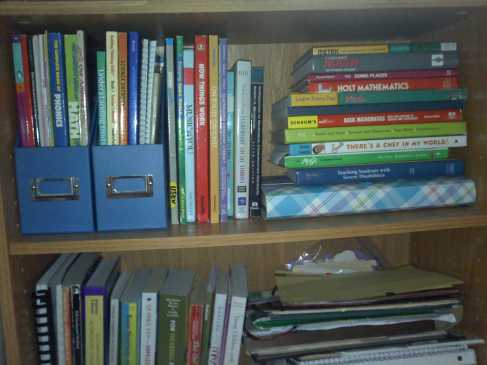 I am not very proud of this.

I’m teaching one little special needs boy. Do I need all this? I’m aware that the answer is no but before I finished typing the question my head was already rejecting the notion of trashing any of it. Weird, I know. What’s worse is this is the small container. I have a much bigger container. Oh, wait here’s something you probably need to know. These are mostly word cards and DJ can’t speak. Yep, that’s right. I have thousands of word cards for a child that can’t say any of them.

There are multiple copies of the cards screaming my organizational disability.  If I’m looking for something and don’t find it in the entire 13 seconds I dedicated to hunting it, I make another one. Sometimes I fantasize about laying the word cards out on the lawn to send crazy messages to the military helicopters flying overhead. No, I’m not under military surveillance.  I live close to a helicopter repair base.

I suppose I keep all the cards because they were DJ’s first form of expressing himself. When flung the picture of the sad boy at me I knew I’d pushed him too far that day.  Time shut these rambling musings down and get back to work. I’ve got a long night of card sorting ahead of me.

Have you wondered where I’ve been? No. Well, why not? You did hear about all the books. I could have been buried beneath them in a bookshelf coffin.

I have made a little progress. I like putting the things on the wall because it keeps me from looking down at the mess at feet. I’ve spent far too much time putting things in one container only to transfer them to another. Sometimes I move from one container to another and another before going right back to the first one. To help me cope with the frustration of that useless activity I made it into a drinking game. Each time I changed containers I took a shot of whiskey. No, that’s not true. Carrie Underwood describes me perfectly. I need a “fruity little drink cause I can’t shoot whiskey”.

I think it’s this whole rambling thing I’m doing is the root of my container hopping. I’ve got to focus. Hey, I’ve got a book for that! If I’m not back in 4 days you’ll know my wish for a bookshelf coffin was granted. 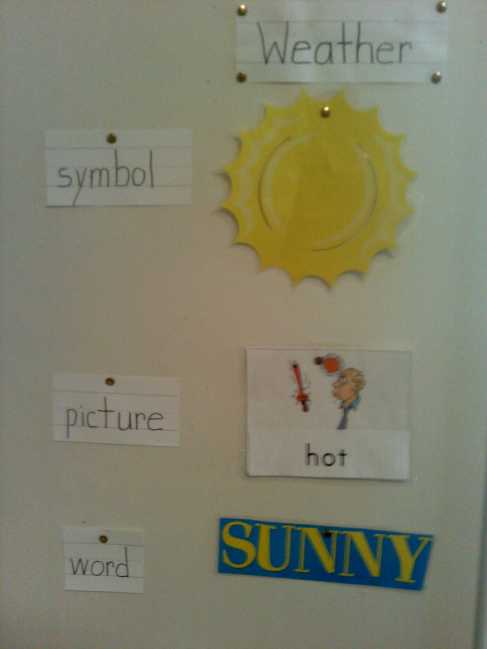 Progress huh? Are you impressed? If you are, don’t be. Because I decided that this year I absolutely had to have this shelf for school I now have 3 rooms in chaos. The shelf was in the living room so all the books had to be pulled from it & stacked on the floor. Since my rather large man-child, Colton was my moving buddy that meant the books were more flung around than stacked. The boy is a bit like his mother. Because I feel the need to own every book in the universe, I incorporated the books from the living room into the two shelves in the bedroom. Yes, that’s right.  I have two more shelves of books. I’m certain if I ever come up missing CSI would determine I was involved in some sort of dare or contest of collecting books. Lets just hope I don’t come up missing before my work is done. I don’t want CSI traipsing through my house thinking I’m a hoarder.